There I was: The sun appeared and was covered again by clouds, which drew interesting shadows onto the walls of the old, partly empty houses. I heard whisteling of a far train, which started to break, some human voices, which became more silent with each step I made. The smell of the city changed from old garbage bags left on the streets, to dog toilets and kitchen smell from the air conditions, which ended up here on the back sides of the cheap Asian takeaways. The chilly wind blew through my hair, which was stuck now on my lipstick, where it was glued on and when it started to bother me, I wanted to take it off without distributing the red color on my entire face. That really was a challenge, as to avoid looking like a scar face, I had to reach the hair somewhere beside the lips. That was almost impossible, because I couldn‘t feel where the hair started to flow on my lips. For that action I had to take off my gloves and so my hands froze off after some seconds and would even feel less, when it came to localize hair on my face.

The closer I got to that walking tunnel, the more the grey-brown impression faded away. It mingled with some colors and the colors grew clearer and became more diverse. I stopped right in front of, what looked like an arch. My mouth opened, my neck bent backwards to make my head being closer to the overhead part and make my eyes take in more of this fantastic view, which was offered now. I stopped. In astonishement it took me some seconds to realize, I wanted to take pictures. Films. Both. But where would I start?: On the right side? To the left? I would have to go and come back on the other side to take in as much as I could from these fantastic pictures created by street artists. All colors were fantastically planned and formed into different motives. Some made you think, others were simply beautiful and there to be enjoyed.

I walked along and planned to check out what to see around the corner after the passage way to turn around afterwards, not to get lost out here. Straight ahead another site appeared. It was surrounded by high fences and on the first sight you would have guessed, that there was only garbage to be discovered. After a close look you could tell, that there were vans, caravans, obviously inhabited once in a while. Nobody seemed to be around now and I took a closer look through the fence: Neetly arranged vegetableble, flower and herb beds decorated the ground. Old cars and other vehicles had been painted greatly and with a lot of love for detail. Some sofas and hammocks hanging around suggested, that the place was well used for relaxation.

Suddenly someone appeared from upstairs and I was so shocked, that a smile appeared on the other person‘s face. The metal walking path to cross the highway was entirely covered with razor wires on the top. There was simply no way to kill yourself by jumping down here.

I turned around and on the right side the wall of the railway embankement offered more of the artistic graffiti I am now fascinated by. One visual story was attached to the next one and each was carefully sprayed. There was still nobody around, as I walked along. Nobody in front of me, or behind me. So I continued along the path between the site with the contemporary sprayer accomodation and the embankement until it turned left, at the far-end of the infenced site. The railway continued straight ahead and as another huge fence stopped everyone from following it, the arts stopped there. My curiosity wouldn‘t come to an end and so I followed the walkway. At a certain point it was very narrow, a wall to the right and that fence to the left. It ended with stairs, which lead over a highway, which was shut off to both sides with big concrete walls.

As the graffiti had stopped, I turned around and looking at the same ones again on may way back, I was even more impressed, as many details were uncovered by watching them again.

From that day on I have always been chasing graffiti whenever I could, to get that experience of newly discovered and untouched places, as well as the thrill of adventure. 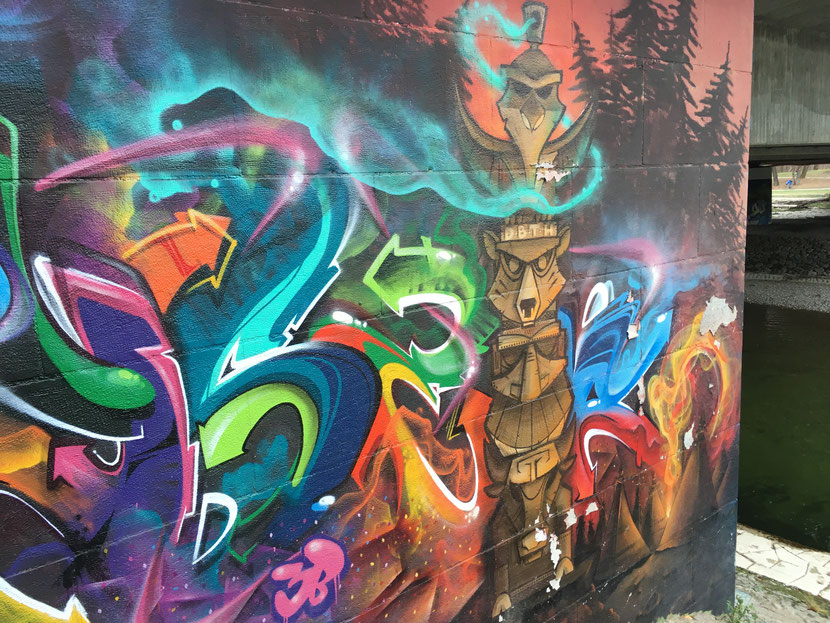 street arts at the river Isar in Munich

street arts at the river Isar in Munich